My father-in-law passed away before I became Mrs. Baker. But, I have heard so many stories about him that I feel like he was a part of my family. In fact, he planted some fruit trees on his property, including an Asian Pear tree.

When my mother-in-law passed away a few years ago, we bought the family house. The very house that my husband grew up in. In fact, his boyhood bedroom is now our youngest son’s bedroom. I think it’s kinda cool! Anyway, the only surviving fruit tree on the property now is this Asian Pear tree. He would have certainly been proud of all the fruit this tree produces!

After spending a couple hours picking up fallen and rotten pears this past Sunday afternoon, I decided to pick a batch of pears from the tree. I took my treasure trove of fresh-off-the-tree pears to the kitchen and cleaned them off under fresh running water. I then peeled and sliced up one of the pears. And then took a nice bite. It was slightly sweet and oh so juicy.

I still have some pineapple pear preserves that I made from last year’s bounty. And, I didn’t really want to have to sterilize canning jars. Then I remembered I had saved a recipe for Fresh Pear Bread. Have you ever looked for recipes that used “Asian Pears” – just about impossible to find. So, I decided to give this Fresh Pear Bread recipe a try and I’m so glad I did!

Asian pears are also known as Apple Pears. Probably because they are shaped more like an apple than a pear.

There are a few different varieties of Asian pears. The tree that grows in our yard produces these green kind of speckled round apple shaped fruit.

I also read that Asian pears should stay on the tree until ripe, similar to apples. Unlike European pears, which are normally picked or harvested while they’re still a little green and allowed to ripen at room temperature.

Asian pears may look like apples on the outside, but that’s where the similarity ends. The inside is firm, crispy, juicy and somewhat “grainy” – just like regular pears.

The peel on the Asian pears have what appears to be two layers of skin. The outer layer is brown/golden, while the inner layer is more green. The skin appears to be brownish/golden/greenish and somewhat speckled, but it’s a very faint speckle.

How do they taste? Well, they have a mild and slightly sweet pear taste. They taste like regular or European pears, but milder and less sweet. But, don’t let the “less sweet” taste fool you! They are sweet. Just not as sweet as others types of pears.

Plus, their shape, texture and sweetness make them the perfect pear for cooking! Case in point – Pear Bread! Let’s make some, shall we?

I’ll share the recipe with you in a moment, but a couple of tips first. 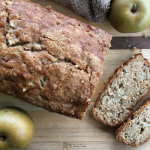 Your family is going to love this Pear Bread recipe! I’m telling you, if you haven’t made it before, you are in for a treat! And you’re going to be absolutely blown away by how moist this pear bread is and how much it tastes just like autumn.

Plus, the pear bread freezes well. So make up a few batches, give some to friends, give some to your family and save some in the freezer. Guess what food gift my family might be receiving for Christmas? You got it – Asian Pear Bread made with fresh picked pears from grandpa’s tree! Priceless, right?!

I was so pleased with this Pear Bread recipe that I thought it would make a great gift. So, I created this set of printable recipe cards that are perfect for gift giving. Now you can make loaves of Pear Bread and gift a loaf along with a printable recipe card. What a great idea, right?!  I mean, how many times has someone gifted you a loaf of bread or cookies or some other homemade dish and you wish you had the recipe?

These recipe cards will print out on any cardstock paper. They are also compatible with Avery #8386 printable note cards and the Avery #19915 My Recipe Binder. Of course, you can also simply print them out on nice cardstock paper and then cut along the outline.

The recipe cards print two per page and are available as a free download exclusively to subscribers of The Birch Cottage newsletter. You can subscribe below:

Once you subscribe, you’ll receive a confirmation email message from me along with a link to the Subscribers Resource Library, where you’ll have unlimited access to these printable recipe cards and so much more!

You can prepare this Pear Bread in mini loaf pans, too! I think they’d make great little gifts. If you try this recipe, please let me know how it turns out for you!

2018-19 Kenarry Creative Team
No Sew Give Thanks Burlap Banner

Hello and welcome to The Birch Cottage! I'm Pam, wife, mom, nana (mawmaw), dog mom and creative behind The Birch Cottage blog. Come explore The Birch Cottage where I hope you'll find inspiration to craft a handmade home. I love sharing my passion for family, cooking, sewing, crocheting, crafting and all things DIY. Thank you for visiting!
[Read more about Pam]

Disclosure:
Posts may include affiliate links for your convenience. All opinions are our own. You are reading and following advice from The Birch Cottage at your own risk. Always use safety precautions. You should read and follow manufacturer’s directions for the products and tools you use. Read more.

Privacy Policy:
The privacy of your personal information is important. We make every effort to safeguard your information and will never sell it to third parties. Read more.

Terms of Use:
You are welcome to link to this site or use a single image and brief description to link back to any post. Republishing posts in their entirety is prohibited without permission. All images are property of The Birch Cottage. Do not crop or remove watermark. Do not reproduce without link back or permission. If you do link to this site, please contact us to let us know. All free printables offered are for personal use only. Pinning is always welcome and appreciated. Thank you!